The Village of Avalon 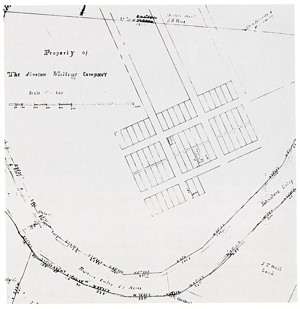 The village of Avalon was built across the railroad tracks situated on higher land overlooking the mill. A drawing of the proposed street plan provided sixty-two, fifty by one hundred and fifty foot lots(0.17 acres each)for housing.1 Although the map shows plenty of room for expansion only sixty-odd dwellings were ever built.

At the same time the mill was going up, houses were being built for its workers. A mill store and a barber shop were also erected. The store made available the necessities required for basic living. When completed the village would mimic a fully functioning little town providing work, housing, and access to basic goods and services. Unlike a typical town, everything in the mill village was owned and operated by the company.

An eleven room hotel was erected for use by company officials, unmarried managers, traveling salesmen, businessmen, and other people visiting the village. In addition to the hotel, there was a boarding house for workers who were building the mill.

The amenities available in the village were comparable with those of rural farming areas of the time. While the mill had electric lighting, electricity was never extended to the village. Kerosene lamps provided illumination for the villagers.2 During the winter months, the homes were heated with fireplaces or wood stoves. Cooking was done year round by fire. Some of the homes may have had a separate cook stove for cooking. However, as in other mill villages, most of the houses likely had a grate installed in the fireplace to facilitate cooking. 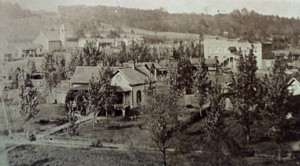 Indoor plumbing was not a luxury to be found in the village. Hand-dug wells fitted with hand-operated pumps were placed along the streets for public use.2 And whenever a lavatory was called for, a privy in the back yard was the answer to nature's callings. 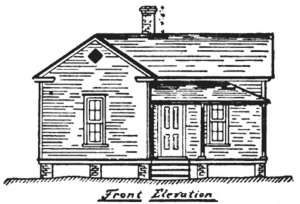 To maximize space in mill villages, the homes were often arranged in a compact checkerboard city layout. It was common for the houses to be identical down to the paint scheme. At Avalon, this wasn't the case. There were the makings of the city layout; however, the houses weren't all identical. A few different styles can be seen in photos of the village. Most of the houses were modest in size and of simple frame construction. A few houses placed along the front row, facing the mill, were larger and more elaborate. This row of more elaborate homes was reserved for managers and their families. Operatives in mill villages often referred to this row as Managers Row. At Avalon, the inspiration for some of the houses may have come straight from a textbook published in 1899, Cotton Mill, Commercial Features.3 The book is more or less a manual for the design, construction, and operation of cotton mills and their villages.

Within the book is a chapter titled Operatives' Homes, which suggested a few designs for mill housing. The designs included here, illustrate how small mill houses could be. The three-room gable house provided three rooms of living area covering a little over six-hundred square feet. For storage, the design included a one-hundred and three square foot shed room. The estimated cost of building the house was $325.00.

The design of the more spacious four-room gable house further illustrates how small mill houses could be. The house provided about nine-hundred square feet of living area divided amongst four rooms. Each room had its own fireplace and a closet. The rooms were not interconnected. Access to each room was provided with doors which opened into a hallway that ran through the center of the house. This house had the potential to board up to four families and carried an estimated construction cost of $400.00. 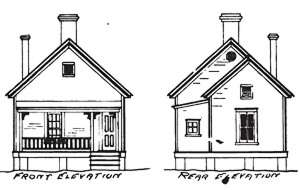 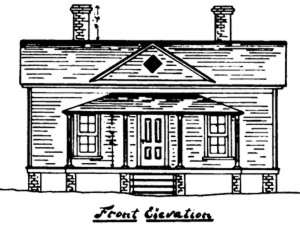