During the days of Avalon, there wasn't a hospital to be found in Rockingham County. It was 1924 before the first hospital opened its doors in Leaksville, which is now part of Eden. In 1900, the field of medicine was still in the dark ages. The doctor worked out of a genuine crocodile handbag and doctored on patients in their homes. Diseases and illness were not understood, but just like today, sick people expected the doctor solve their illness in a timely manner. When faced with an unidentifiable problem and an impatient patient, some doctors prescribed narcotics to hide the symptoms. Unfortunately, there were other doctors who addressed unidentified ailments through crude and bizarre experimentation. Back then, there existed a large variety of medicines and medical devices that bolstered outlandish claims but, were backed by sheer ignorance. Many of these devices and treatments employed electric shock, radioactive substances, vibrations, and even the administration of mercury. Fortunately, the times were changing and several positive medical breakthroughs came from the era. Around 1900, antibiotics were discovered and to the relief of blood transfusion patients, Karl Landsteiner figured out that blood came in different types and that those types were not compatible. 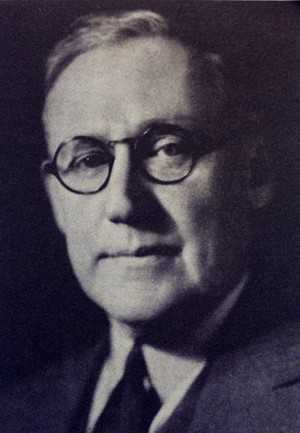 Avalon never had a resident doctor. Whenever urgent medical attention was required the doctor in Mayodan had to be summoned. Dr. Thomas Whitmell Davis served the villages of Avalon and Mayodan beginning in 1901.1 In 1906 he left for Johns Hopkins Medical School in Baltimore, Maryland to further his studies. Mr. Davis was replaced by Dr. George Harrison.1 Until about 1908, there were no telephones in Avalon so fetching the doctor literally meant fetching the doctor. Without a means of speedy communications, it took a considerable time to get the doctor to the village. When children were born a few of the women at Avalon served as midwives and a self-trained nurse tended to those with dire needs.1 Whenever someone passed away, Mrs. Belle Carter prepared the body for burial.1 Nora Vaden Scearce, a native of Avalon, recalled that whenever there was an illness in a family, the neighbors looked after each other.1

In addition to the doctor, there were alternate ways of getting medicines in Avalon though many of these so-called medicines belonged in the category of quackery. There were street peddlers who visited Avalon to sell their wares including patent medicines. Patent medicines typically had some secret ingredient — the cure — which was diluted in an amount of alcohol or other intoxicating substance to manifest an effect. If the customer interperted the effect as a sign the medicine was working he or she might become a repeat customer. Exaggerated and ridiculous claims made these medicines enticing, but there were rarely any scientific grounds to back them up.

Houston Highfill of Mayodan would come to the village of Avalon peddling household products and patent medicines. His best-selling product was said to have been Japanese Oil.2 Japanese Oil was touted as "A medicine that is equally valuable for man, beast, or fowl."3 Amongst the ailments the oil claimed to remedy was asthma, cholera morbus, fever sores, gout, headache, snake bites, rheumatism and the itch. Japanese Oil was also said to be excellent for getting hens to lay.3 The oil was recommended for internal or external use and the going price was around fifty cents for a two fluid-ounce bottle — more than a day's pay for the younger workers in the mill. A 1915 analysis of Japanese Oil deemed it to contain alcohol, capsicum, fusel oil, and oil of eucalyptus.3 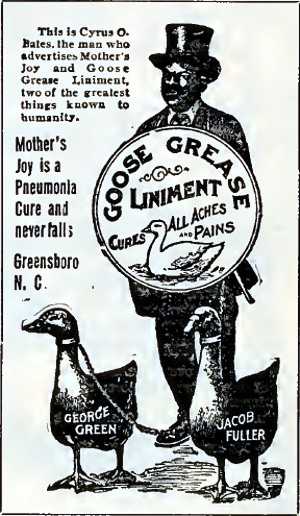 Another street peddler came to Avalon walking with a pair of harnessed geese and flaunted his product, Goose Grease Liniment by calling out "Cures all aches and pains."4 Goose Grease Liniment was manufactured in Greensboro, North Carolina.5 And like Japanese Oil, Goose Grease also carried an impressive list of ailments it cured including: Sore throat, cough, cold, croup, fire burns, and scalds.5 A printed advertisement claimed that Goose Grease Liniment was the BEST known remedy on EARTH for PNEUMONIA."5 In 1906, it is possible more than a few bottles of Goose Grease was purchased in Avalon, because in April of that year there was a pneumonia outbreak.

In February 1906 Dr. Davis was busy dealing with a pneumonia outbreak in the villages of Avalon and Mayodan. Pneumonia seems to have a hold of our people was reported by the Wachovia Moravian.7 In April four deaths were reported: Mr. Pleas Mabe age 58, Mr. Smith, Mr. George Stewart, and Marshall Pike age 12.8 A George Stewart may have been one of the managers of the Avalon mill; however, this connection is not certain.9

Around 1900, there was a growing smallpox epidemic in Rockingham and neighboring Guilford County. From May 1, 1899 to May 1, 1900 there were five-hundred and twenty cases and twenty deaths reported in Rockingham County.9 The reason for the high number of cases was that proper measures were not taken to control the disease. It seems the attending physician9 was incorrectly diagnosing the disease as the chicken pox.9 Fortunately, the disease's true identity was figured out and the number of cases began to decline. For the year May 1, 1903 to May 1, 1904 the reported cases of smallpox dropped to thirty-nine for Rockingham County with no deaths listed.11 Dr. Samuel Ellington of Wentworth went about the county administering vaccinations and strict quarantine requirements were imposed. People who were exposed to smallpox were confined to pest houses. The pest houses were roped off as a warning for people to stay away.1 Of course, being exposed to the disease didn't mean it was ever contracted. The exposed were quarantined as a precautionary measure to further inhibit the spread of the disease. 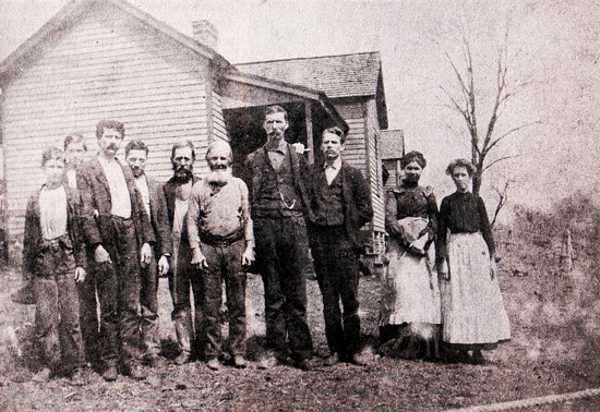 Fig. 26. Pest house at Avalon. Rope surrounding the house can be seen in the foreground.