A lack of compulsory school laws did not preclude efforts to provide education to the children of Avalon. In all likelihood, the Moravian Church was the driving force behind establishing schools in the villages. The Moravians held a high regard for education and unlike some of their contemporaries, the Moravians maintained the idea that both boys and girls should receive an equal education.

Sources have revealed few details about the school at Avalon. However, there is an interesting article in the February 1906 edition1 of The Wachovia Moravian detailing how the school began in Mayodan. The article illustrates a genuine interest in providing a school by the mill's founders. It also provides insight into conditions and attendance. I feel this information is worthy of including here as the school situation in Avalon and Mayodan were likely faced with similar issues and conditions.

In the fall of 1897 efforts began to establish the first school in Mayodan. Mrs. Lucy Weathersbee was suggested for the teaching position. A letter written to Mrs. Weathersbee offered her the position. The letter invited her to her to Salem, North Carolina to discuss the position with the pastor, Reverend Howard Rondthaler. The letter also mentioned they were looking for a teacher who would take an active interest in church and Sunday school work and asked Mrs. Weathersbee to consider the position seriously before making any decision. The letter ended with a warning that the job would not be a light undertaking.1

The idea fascinated Mrs. Weathersbee and she expressed that she loved pioneer work. She met with Reverend Rondthaler and an appointment was made for them to meet in Mayodan in November. The meeting evolved into an agreement with W. C. Ruffin, treasurer of The Mayo Mills, to establish the school with Mrs. Weathersbee as teacher. Mayodan did not have a school building; however, the Moravian chapel was offered for use. The chapel was to be fitted with patent desks, a rostrum, a chart, a blackboard, and an old piano. School was set to begin on January of the following year.1

Monday, Jan 3, 1898 was the first day of school in Mayodan.1 There were doubts as to how the new school would be received. The main concern was whether or not the children would show up. Would the parents be interested and would the children themselves be willing to leave their play and come?1

When the first bell rang fifty-five children piled in the chapel. Only ten of those had ever seen the inside of a school room. More children came and soon there weren't enough benches to accommodate the students. In response, W. C. Ruffin delegated the task of building more benches to a Mr. Lehman. In the meanwhile, boxes fetched from Mr. Tesh's store served as seating for many of the children while others sat on the floor. By the second Monday, eighty-two children had enrolled. The people who planned and funded the school were pleased with the turnout and took it upon themselves to voluntarily levy a tax to ensure the school's continued operation. Early on, Colonel Fries visited the school. He stood against the wall with a look of surprise and pleasure. He later stated that the wonder to him was to see those untrained children so soon keeping in such perfect order.1 Regarding how Mrs. Weathersbee dealt with so many students, she said that the work was mostly of a single grade. Sixty-five out of her eighty-six students were primary. Throughout the term, the number of students enrolled accrued to one hundred and fourteen and the average attendance was sixty.1 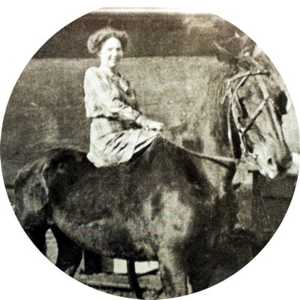 Unfortunately, I've not been able to locate any account of the school in Avalon. It is unclear as to when the school was organized, but sources suggest it was early on. The first public school was held in two rooms of a house by Miss Elma Hege.2 Like in Mayodan, the majority of the attendees were probably primary age. Many of the older children were working in the mill. Instead of attending the public school some children were taught at home by their families.2 An official school building was never built in the Village of Avalon. Sources say disciplinary problems with students led to a high turnover rate for teachers.2 At least seven different people held the teaching position over a course of less than twelve years.2 The last school teacher in Avalon was Miss Ida Summers who taught between 1909 and 1911. During the time Miss Summers was teaching, the original company store was destroyed by fire. A two-story brick building was built to replace the store. The second floor of the store became the new location of the school.2

In Mayodan and perhaps Avalon too, mill workers received an opportunity for at least a rudimentary education. Around 1909 Reverend Berkely held a night school for workers who were unable to attend the public school. Berkely claimed to have about fifty students who were divided into three classes. His students were young men learning to read and write.3