On Easter Sunday, April 7, 1901 two church services were held in the Village of Avalon. At the time, the village did not have a proper church building. Details of the event were written up in the April 1901 edition of The Wachovia Moravian. The article painted such interesting visuals that I couldn't fathom altering a single word. Therefore, I am presenting the article in its entirety.1

Easter Sunday afforded the opportunity of holding two preaching services in Avalon. For this purpose the dilapidated commissary shack used for lodging during the construction of the dam was utilized. It is a unique place of worship. Very high planks nailed from wall to wall and very low boxes serve for seats. Two dozen broken window panes afford more ventilation than would be necessary did not the rusty stove, whose pipe projects through the window, smoke so atrociously that the preacher was compelled to stop from time to time during the sermon, and move to another part of the room to obtain fresh air, the meanwhile wiping a copious flow of smoke tears from his streaming eyes.

Morning and night the room was crowded, the congregation having been summoned by the prolonged and vigorous ringing of a large dinner bell by the preacher.

In fact, at night every inch of sitting space was taken, and twenty leaned outside against the open door, or stood beside the minister as he spoke. It is a happy inspiration to preach under such circumstances. One of the hearers had not attended divine service in two years, another had been inside a church but once in four years.

An after-meeting of deep interest was held.

In June of 1901 a movement to build a church at Avalon was initiated. William E. Spaugh, the pastor at the Mayodan Moravian Church, had on occasion preached at Avalon since its early beginnings. Because, the founders of The Avalon Mills had strong ties with the Moravian Church, it was no surprise the church at Avalon would be a Moravian church. The Avalon villagers pledged over $100.00 to help build the church.2 The people of Mayodan pledged about the same amount. Including donations from various sources the total grew to over $550.00,2 which was considered enough to build a Modest building that could be expanded upon if the need arose.2 Reverend Howard K. Rondthaler of Salem stated in an article, "There is every reason to believe that this community [Avalon] will stand by us in our work. The interest according to our services by many who heretofore were entirely unacquainted with the Moravian Church has been most encouraging."2 He also added that an additional $150.002 would be needed for the church.

Three months later the cornerstone for the church was set to be placed. The church, when completed, would represent a $1000.003 investment. The structure would cost $725.00 to build and $600 of that amount had already been raised.3 It was decided the church would be built on a stone foundation and located on a slight knoll overlooking the village.3

Due to rain delays the cornerstone wasn't placed until the afternoon of Sunday, October 13, 1901.4 The event was accompanied by a sizable gathering from both Avalon and Mayodan. The railroad and country road from Mayodan were thronged with people — both young and old — on their way to the corner-stone event."4 At five o'clock pm the service began. There was singing led by a brass quartette, from the Mayodan Sunday School, who were directed by Mr. Thomas Lehman.4 Afterwards, the pastor preached a brief sermon and Mr. Sides of Avalon, took charge of sealing the copper box. Among those present were Charles Smith, listed as the builder, and Bro. W.T. Poindexter, listed as the stone mason.4 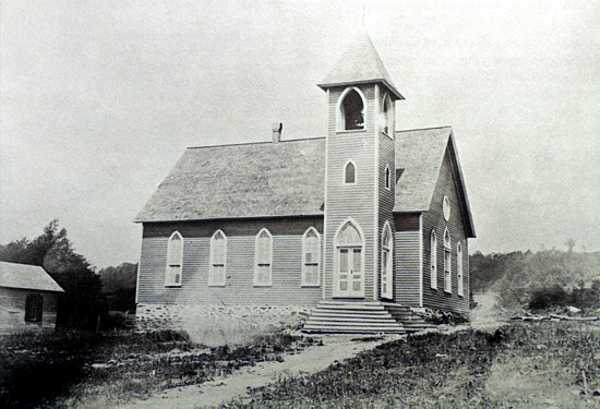 In December 1901, the church building was complete. An anonymous donation provided the seating and $13 had been raised towards the purchase of a bell for the church. The first service wasn't to be held until after the new year. However, a Christmas celebration was planned for the church.5

On Sunday, January 12, 1902 the Avalon Moravian Church held its first service.6 It was an introductory service given and arranged by Brother Rondthaler. Edgar Hege, superintendent of the Avalon Mill, gave a welcoming address. Brother P. Tesh spoke on how to help the minister, and Charles Smith talked about the advantages of having a resident pastor.6 Later that afternoon, at 3:30pm, a meeting was held to organize the Avalon Sunday school. Edgar Hege was placed in charge of the school and sixty-five people enrolled pledging to be regular attendants.

The March 1902 edition of The Wachovia Moravian reported that February attendance was good at the Avalon church.7 Apparently, the reporter visited the church and had the following to say concerning his experience. "Better streets and sidewalks are needed. The soil is spongy and sticky. It gets muddy directly, and the mud is of a disagreeable kind. One must wade through it, and if you lose an overshoe occasionally, keep your temper."7 According to the reporter, a drawback to church work in both Avalon and Mayodan was that the populations of the villages were unstable. At least half of the church's members were non-resident and inaccessible to the church; however, new members to the churches were loyal and enthusiastic.7 During this time, the Avalon church received a pulpit desk donated by the Fogle Brothers, a building company from Winston-Salem.7

In May of 1902 an organ had been acquired by the church and the efforts to raise money for a church bell continued. Some of the ladies in Avalon were making and selling candies to help raise funds for the bell.8 Funds were slow in coming and it wasn't until four years later in April of 1906 that their goal had been met. "Our hustling pastor in a very short time received from our liberal hearted people about $200.00 towards building a bell tower for Avalon and painting the church, both in and out side; and fixing up fence around the church."9 During the same year other denominations were utilizing the church in addition to the Moravians. Reverend Sikes of the Presbyterian church held services there one Sunday each month.9 Reverend Alfred Berkeley, priest in charge of Episcopal missions in Mayodan, Avalon, Stoneville, and Madison also held monthly services in Avalon. Reverend Berkeley was based out of the Mayodan Church of the Messiah.10