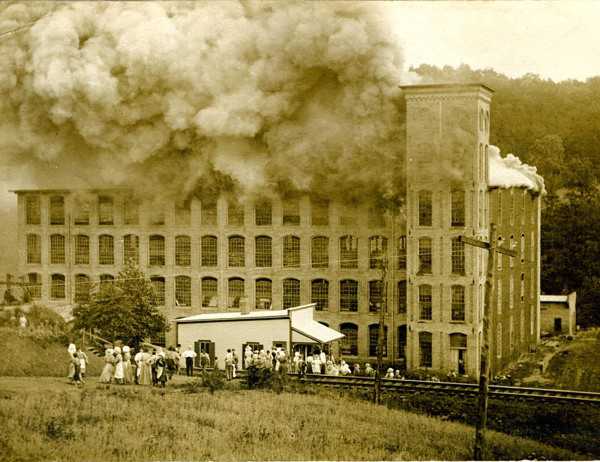 June 15, 1911, Grover Cobbage was operating spinning frames on the fourth floor. The time was about 5:55pm — almost quitting time. Grover left his frames to change clothes. John Richardson assumed Grover's post to keep a watch over his frames. While Grover was away, John noticed smoke emerging from one of the frames. A fire had started. From a nearby pole, John grabbed a bucket of water. Without delay, he pitched the water onto the flames. The fire spread. Fueled by air from open windows the fire grew rapidly out of control. John knew it was too late. Everything was covered with layers of cotton lint, dust, and machine oil. Within moments, the flames expanded to encompass the entire floor.1

In a panic, the Poole brothers ran through the lower floors. Over the drone of machinery, they cried FIRE! The mill's on fire! No one listened to the teenagers. The cries were dismissed as a mere prank — a prank the mill workers had all heard before. It was fortunate that the fire occurred at quitting time. The workers were cleaning up and heading out the door. Almost everyone was out of the mill before the fire spread to the other floors.1

When a few people in the village spotted the fire, they dropped what they were doing and ran toward the mill, screaming. The fire bell rang, alerting the rest of the villagers who poured from their homes in a frenzy, leaving behind suppers burning on their stoves. Consumed by fear and concern for their loved ones, the villagers raced toward the mill. As they approached the mill's entrance, heat from the furious fire pushed back at villagers.1 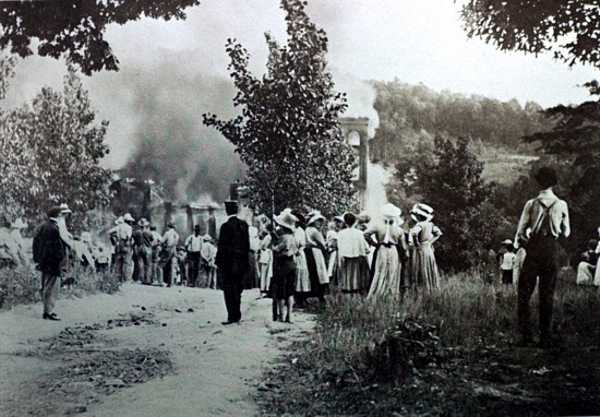 Fig. 33. Employees and their families held at bay by heat of the fire.

Several of the mill's overseers including Sherman Reynolds, Edgar Hege, and George and Emmett Suttenfield remained inside the mill trying everything they could to save the mill and anyone who had been left behind. Soon, fire had seized the men's escape route, but with the aid of a fire ladder they were able to escape. Everyone got out alive. Unfortunately, there was no hope for the mill. That afternoon, as the sun sank down, the villagers gathered in groups or sat on the hillside and watched as their livelihood went up in flames.1 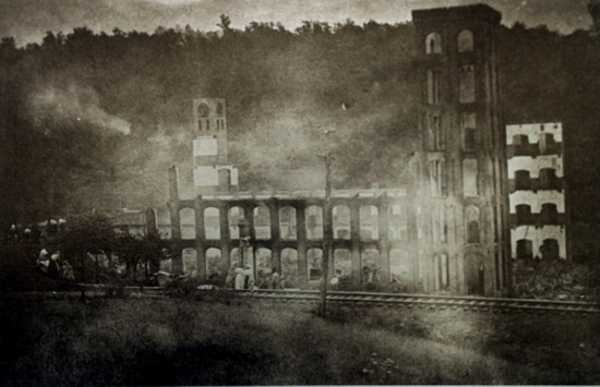