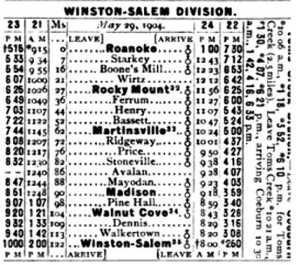 Fig. 22. Norfolk & Western train schedule. Winson-Salem division, May 29, 1904. Avalon is listed on the route but is misspelled as "Avalan"

Because the mill was within walking distance of the village it is doubtless that most navigating through Avalon was done on foot. For far away distances the villagers had the Norfolk & Western railway to get them en route. Avalon never became an official stop for passenger trains. However, in 1902 a shelter was erected that served as a train depot. The depot was a flag stop station where anyone wanting to ride the train had to flag it down when it came into sight.1 At least one villager took regular advantage of the train. Miss Ida Summers told of C.B. Daniels, an overseer in the mill, who took monthly trips to Roanoke, Virginia to visit his lady friend. While in Roanoke he would buy new books to take back to Avalon and share them with his fellow villagers.2

For short trips, the train wasn't always convenient. The trains cost money to ride and were on exacting schedules. A quick trip to Mayodan could have meant hours waiting on the next train. The two mile hike down the railroad tracks was a quicker option. The trip could also have been made on horseback, bicycle, or by rowing down the Mayo River in a small boat. Frank Clarvoe, the foster son of Reverend Alfred Berkeley, recalled rowing up the river from Mayodan on numerous occasions with Dr. Harrison when medical services were required in Avalon.3 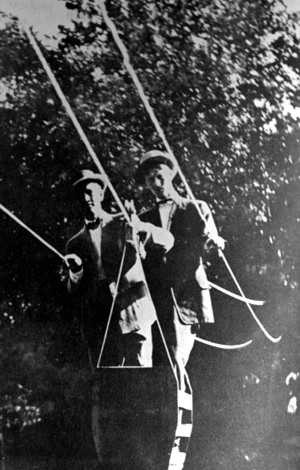 The mill workers who lived in the area of Bentontown had to ford the river to get to and from work. They either used a small boat to cross the waters or they crept across a swinging rope bridge which was described as nothing less than hazardous. One icy morning Mrs. Ada Benton slipped on the bridge and had she not caught a hold of the ropes she would have fallen into the frigid waters below. Marcus Crotts was walking behind her when she slipped and managed to pull her back up to safety.4 Mr. Eugene Benton, wanting to remedy the bridge situation, envisioned a design for an improved swinging bridge. Marcus Crotts along with his helpers in the mill's shop fabricated Mr. Benton's idea. The design featured a wooden basket to stand in. The basket was hung by a pulley on a rope which spanned the river. Side ropes ran parallel on either side of the basket. To cross the river one simply climbed into the basket and used the side ropes to pull themselves to the other side. Eugene Benton made the first voyage to demonstrate its operation.5 The villagers liked the new bridge so much that a second bridge was built along with enough baskets to ensure there was always at least one basket on either side of the river.6

While the efforts these mill workers took to ensure safe passage over the river were both imaginative and commendable, one can't help but wonder why the company didn't afford a proper bridge for its' employees.